Our brief was to establish the decorative history of Guisborough Town Hall’s heraldic cartouche. The carved stone cartouche houses the coat of arms of the Chaloner family that is set into the north elevation pediment. Investigations began by taking paint samples from all elements of the carved stone cartouche. It is thought possible that the cartouche may have originated from an earlier site at Guisborough Hall Estate which was demolished in 1870 just at the same time when the upper floor of the Town Hall was added. 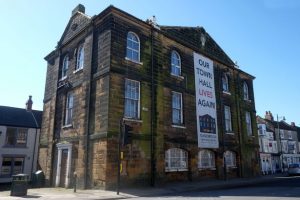 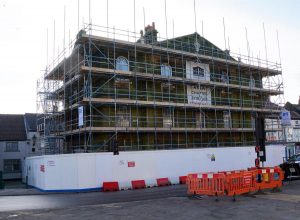 The cartouche was found structurally sound although it had suffered an amount of surface damage and had a large crack running from side to side. Samples were collected and observed by microscopic examination. The information gleaned from this analysis helped us to build  picture of the different stages of the decorative history. It revealed layer procedures, colours and decorative processes applied. 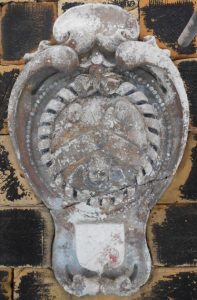 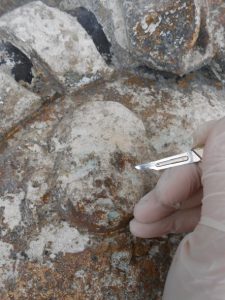 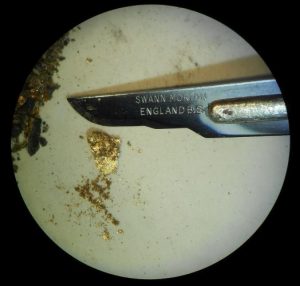 In short the history of the decoration revealed that the cartouche had previously been painted in stone colours, similar to the existing surrounding stonework, and then at a later stage (likely pre-1950’s) it had been given a much more decorative appearance of gold leaf with a brick red glaze with details picked out in black and cream etc. 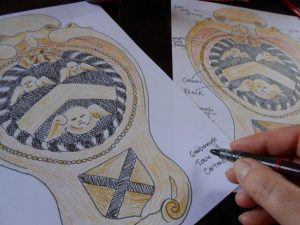 Is it possible the cartouche was decorated after the second world war to celebrate? This gold leaf scheme was then later overpainted with modern alkyd paints, unfortunately due insufficent surface prepartion these layers have not survived as well as the earlier schemes thus leaving little evidence of the overall scheme.

At the request of the client stage two of the project was to reinstate the gold leaf decorative scheme. We take great enjoyment at reinstating any historic decorative scheme. From mixing colours by hand to applying a decorative finish we gain a greater understanding of how this was originally achieved from start to finish. We know how important it is to understand materials and processes, historic and modern alike to achieve a faithful representation of our heritage and history.

Here comes the good bit – the reinstatement of the decoration. All surfaces were prepared to receive the forthcoming decoration. To ensure a quality finish and one that is suitable for an exterior it is very important to prepare the surface suitably and use the correct materials. 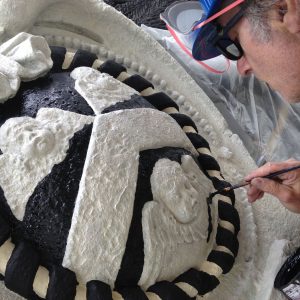 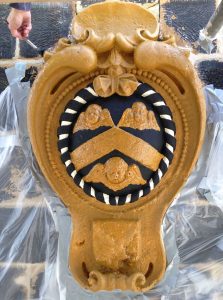 Once all areas were gilded the gold required a brick red glaze. This glaze found on the paint samples was hand mixed to match the paint sample exactly. The application of the glaze had to be carefully considered to create light and shade, shadow and depth and help define detail enabling the viewer to interpret the cartouche more effectively from below. 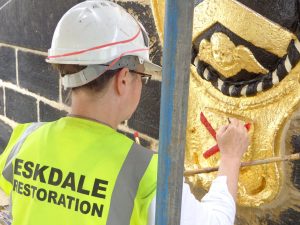 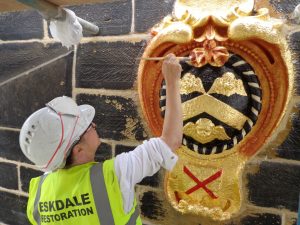 A scaffold currently surrounds the building so it can only be seen from the ground once this has been deconstructed, likely in 2022.

We are very pleased with the end result. Time was left to take in some views, local sites and sample the local bakeries. 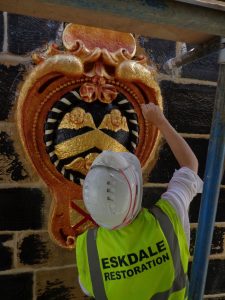 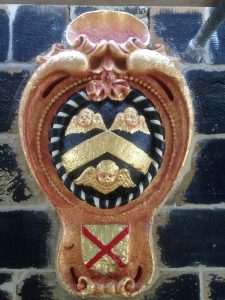