Frames come in all shapes, styles and sizes. They can be oil or water gilt, often both techniques are used on the same frame to create a difference from the matt of oil gilding to the high shine of water gilding.

Our client had been gifted a large Regency mirror frame. It had been stored in an outbuilding in North Yorkshire for many years until recently. Thankfully the outbuilding was dry so the frame did not suffer any damp issues however it was evident that the framework had been overpainted. Our job was to investigate the decorative history, with this information, advise on a course of action and then carry out works. 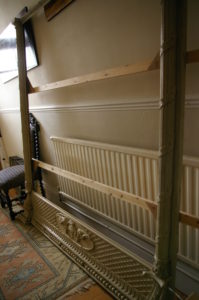 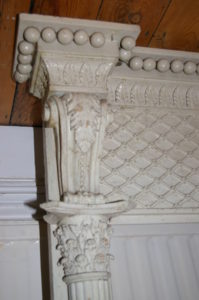 Our investigations revealed that the frame had been originally water gilt having a pink bole layer, it then had a further water gilt layer this time havng a black bole. Following the water gilt layers was an oil gilt finish followed by a bronze paint and then finally a white oil based gloss finish which is what you can see in the photographs above. Our clients decided that they would like to see the original water gilt finish restored.

Before any water gilding could be carried out it was necessary to remove all oil based top coats and get back to the original layer. This allows for the process of water gilding to be carried out successfully, also the paint removal would innevitably bring back any detail that had been lost over time. 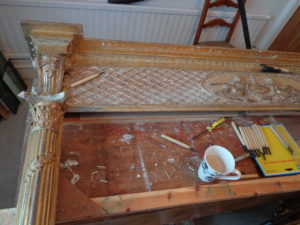 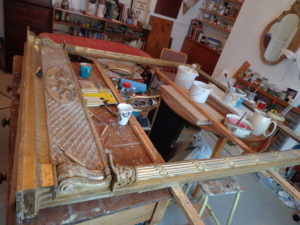 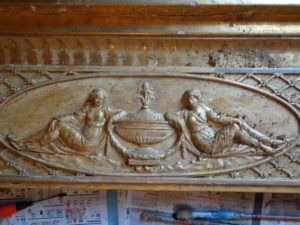 At this stage it becomes apparent where previous interventions have occured and where fillings or replacements are needed. All this preparatory work is crucial to the success of the final appearance of the frame. After many hours of work the frame was ready for the bole layer (a fine clay bound with rabbit skin glue). 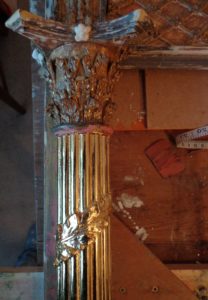 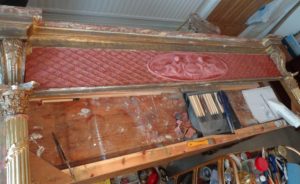 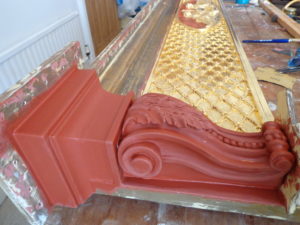 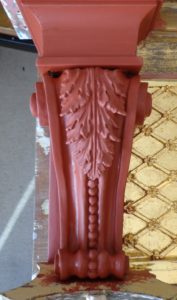 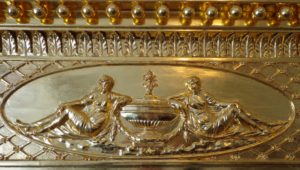 After all the preparation was completed the laying of the gold leaf could then go ahead followed by many hours of burnishing. 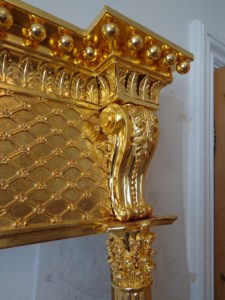 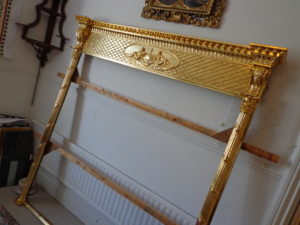 It is believed that the frame had been housed in the outbuilding in North Yorkshire since WWII. There is no record from where it orginally came however, there can be no doubt that, due to its size, it originates from a large stately home. The frame now resides in a new build library and looks splendid. 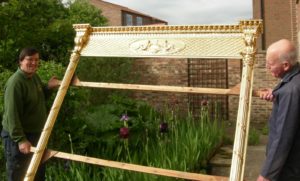