Preliminary investigations into the decorative history at Nottingham Cathedral (the cathedral church of St. Barnabas) are being carried out. St. Barnabas’s architect was A.W.N. Pugin and the church was completed in 1844. We have reference of Pugin’s decorator carrying out the decorative scheme. We also have records of two 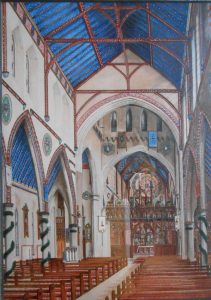 further decorative schemes having been carried out in the 1870’s and then again in the 1920’s. 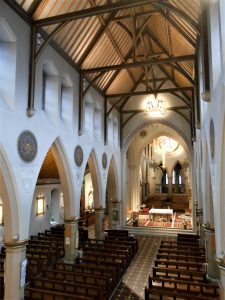 The next two (and last) schemes in the 1960’s and 1990’s were predominantely plain painted except for attempts at restoring Pugin designs in selected areas in the east end chapels etc. The main objective of these initial investigations is to establish if A.W.N Pugin’s decorative scheme still exists underneath these later decorative interventions.

We selected areas on which to focus to carefully take back paint layers to reveal any underlying colours/schemes/designs. The ceiling beds were particularly enticing. Where are the Pugin stars? What are the designs and patterns of the stars? Are they gilt or painted? Maybe there aren’t any stars at all. All we had to refer to was a picture that had been painted in the 1880’s clearly depicting a starry ceiling (see photo on right). The date of this painting suggests that the stars depicted here are the 2nd decorative scheme (under Bishop Bagshawe). Our job was to find and identify Bagshawe’s scheme, Pugin’s scheme, if it still exists, and any other schemes. 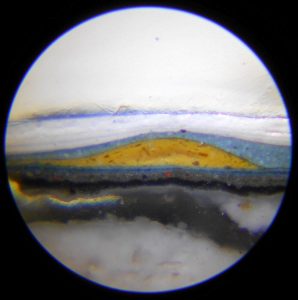 Now knowing there was a likely stencilled scheme on the ceiling we set about working on site to open ‘windows’ into the past by carefully removing paint layers to reveal schemes and designs. After breaking through the first two schemes of plain painting we found the 1920’s scheme of  a large central star with four smaller stars top and bottom (see far right ceiling panel on photograph below). this scheme is a repeat apttern and is carried out using Naples yellow. Going further back in time we identfied Bishop Bagshawe’s star scheme, c.1870 as depicted in the painting above. This scheme has a large central six pointed star with an addtional star bursts between the points, again the central star has smaller stars top and bottom and is a repeat pattern (sse photographs below).

So where is Pugin? Sure enough just sitting just beneath Bagshawe’s scheme Pugin’s stars slowly started to reveal themselves. The stars are six pointed and are all the same size and form a repeat pattern (see photograph below). Very simple. 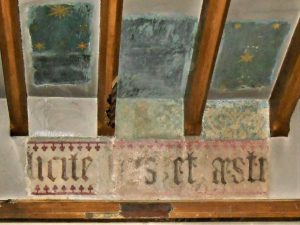 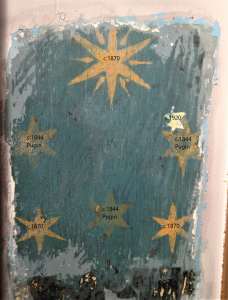 This research is ongoing. Much has been discovered. There is still much more to reveal and we’ll keep updating here. For now here are a handful of images of some of the findings from the nave archways and west wall. 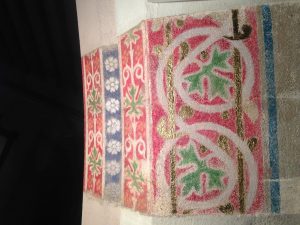 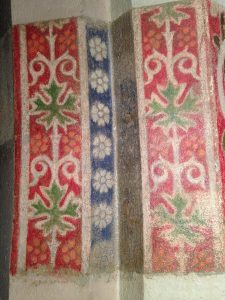 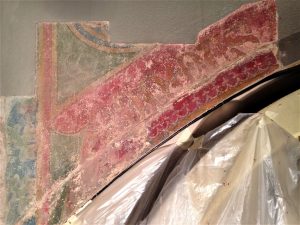 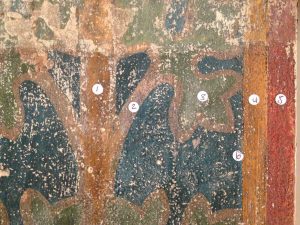